What evil lurks in the heart of a pumpkin? 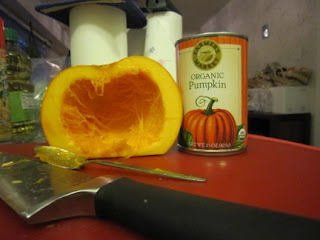 None, it's just seeds and stringy stuff. As mentioned in my Monday post, I'm doing a test run on pies for Thanksgiving. DBF vetoed the gluten free pumpkin pie recipe (part 1 and part 2) so I used the recipe on the back of the can of organic pumpkin. My "family recipe" is the one of the back of the Libby's can. In my experience, the can recipes are all very similar...1 can puree, 1 can condensed milk, a couple of eggs and spices.

The crust was store bought, I'll probably make it from scratch for the big day, so the only difference between the two pies was the puree. Yes, the fresh puree was more yellow than the canned. They both...tasted like pumpkin. But when one's entire pumpkin experience is likely based upon consumption of the canned product...one does not have a good baseline for comparison. The consistency was the same, I was very careful to remove the stringy bits prior to puree. 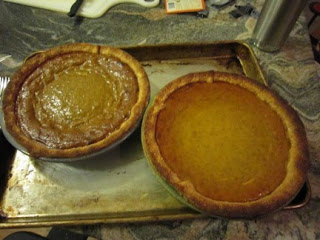 A day of puree draining and an hour in the oven later...pies! As you can see, I used my ceramic pie plates. Can you guess which one is which? Hmm? Can you? The one on the right, green pie plate, is the one that I made from scratch.

As exciting as preparing to bake and actually baking the pies was...eating the pie is better. I conducted a blind taste test with DBF and Evil Minion.

Evil Minion
Does not want me to watch her as she eats the pie...a reasonable request.
Scratch:Spicier. 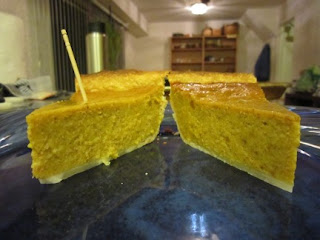 KP Verdict
I don't know if it was worth the work to process the pumpkin. Either my pumpkins weren't very sweet to begin with or there's something in the canning process that causes the puree to become sweeter, probably the extra heat. If the goal is to capture the flavor of the harvest then yes, it is worth the extra work to prepare the puree yourself. If you believe, as I do, that the intentions of the cook can influence the flavor of the food then yes, cut out as much of the external processing as possible. If you only need to make one pie a year to keep the future mother-in-law (FMIL) happy then...make it from scratch or at least make it look like you made it from scratch. I have enough puree to make this year's pie from scratch but I might be dumping out a can of puree into a container that I can conveniently remove from the refrigerator when FMIL watches me bake. Me? Evil? Never...

Happy Cooking!
-KP
Posted by Kitchen Penguin at 9:05 AM