Well, not until February 3rd but I need to start planning my Chinese New Year foods. Why? Procuring ingredients might require a trip to DC Chinatown or getting a care package from my parents. Do we have any requests for a recipe pictorial?

I want to make gao so I can pan fry slices of it in butter after it becomes hard (I also like fried mochi tossed in kinako and sugar). I think it would be difficult to get DBF to eat jai. Honestly, I don't like jai but my mother made me eat a little bowl every New Year when I was growing up so part of me feels obligated to have jai...same thing with ozoni. Pot stickers? I like pot stickers and it would be useful to have some in the freezer. Jin deui? Maybe if I had help consuming them because they're terrible cold/reheated.

Do you celebrate the lunar new year? Do you have a menu planned? Maybe I should just order take out from the local Chinese joint. Nah...what's the fun in that?

Warm Wishes,
KP
Posted by Kitchen Penguin at 7:00 AM No comments:

What do you do with a burdock root? 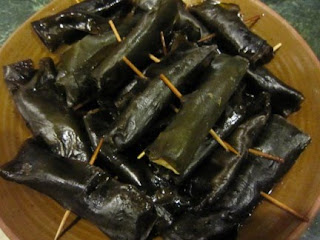 I was teasing this all Saturday on Twitter and here's the answer...konbu maki. It's my father's favorite New Year's food and one of my contributions to the cooks guild meeting that I attended on Sunday. I was unable to find kanpyo at the local Asian market so I had to secure these little flavor bombs with toothpicks.
But what's konbu maki? Seaweed wrapped pork rolls.
Konbu Maki
8 oz. nishime
konbu
1 lb pork butt
1 package kanpyo
1/3 c shoyu (soy sauce)
1/4 c sugar
2 T mirin
Gobo (burdock root)
Soak the dried konbu in warm water until it becomes pliable. Cut into 5-6" long strips. Soak the kanpyo in a separate dish.
Scrape the skin off the burdock root and slice into sections the width of the konbu. (I tend to quarter the thicker pieces and half the thinner ones). Par boil the gobo and pork butt (in separate pots) until the pork is cooked through (this is my timer). Slice up the pork so you have enough pieces for the konbu (the goal is to have one piece of gobo and 1 piece of pork in each maki). 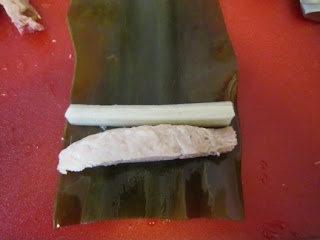 Roll.
This is where you would tie the roll with the kanpyo (or use a toothpick if you don't have any kanpyo).
Put konbu maki in a sauce pan, add enough water to cover (use hot water to speed up the process), and cook until tender (2-3 hours).
Drain out water. Add shoyu, sugar and mirin mixture and simmer for another 30 minutes (or until reduced to a syrup).
Some notes: 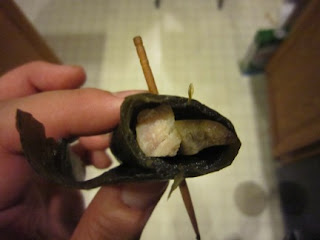 Why start a project if you don't follow through? (Project Update)

Penguin date 7th of January 2011...the not eating out part of the project is not going well. This is mostly due to poor health and general laziness at Blackbird Tavern. But I want to focus on the accomplishments:
How's your January going? I'm going to make a pilgrimage out to McCutcheon's tomorrow so I can restock my parents' pantry with orange marmalade and strawberry jam.
Best Wishes!
KP
Posted by Kitchen Penguin at 7:00 AM No comments:

What do you think is more environmentally friendly: using glass (Pyrex) containers or disposable (recyclable) aluminum containers for freezer to oven cooking?

Glass Pros:
Glass Cons:
Aluminum Pros:
Aluminum Cons:
Does anybody know how to calculate the amount of energy used to create a glass pan vs an aluminum pan? I did a cursory search and couldn't find anything useful. I imagine that the actual manufacturing energy is less for the aluminum but what about production of the raw materials? Yes, I can buy my glass pans used...but it's hard to find tight sealing lids for the older pieces and I will want lids for freezer storage.

What do you think? Do you have any additional pros and cons? Suggestions?

Warm Wishes,
KP
Posted by Kitchen Penguin at 9:16 AM 2 comments: