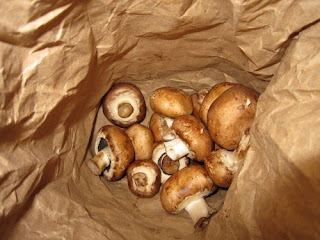 Hobbits have a passion for mushrooms, surpassing even the greediest likings of Big People. A fact which partly explains young Frodo's long expeditions to the renowned fields of the Marish, and the wrath of the injured Maggot. On this occasion there was plenty for all, even according to hobbit standards. - J.R.R. Tolkien The Lord of the Rings

First, an apology for not posting on Friday or Monday. I want to say that it's because I had two busy days at work and my computer at home doesn't like to edit photos but that's a lame excuse. I had intended to make the Friday Challenge mushrooms but Friday has come and gone. I had intended to do the Challenge follow-up with beef stroganoff but Monday is also come and gone. So, dear reader, what follows is my big catch-up post.

Mr. Brown suggests storing fresh mushrooms in a brown paper bag in the refrigerator. Moisture can condense on mushrooms stored in their Styrofoam containers wrapped with plastic and moisture can lead to accelerated decay.

I pick up a container of crimini mushrooms almost every week at Costco. They're a little more expensive than the white button mushrooms but I think that the crimini have more depth of flavor. I like to use my egg slicer to make quick work of fresh mushrooms that need to be sliced.

What can you do with mushrooms?
The following recipe is adapted from the Curves Members' Guide. 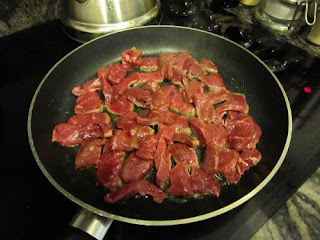 Brown the beef in the olive oil until cooked through. (Above photo is of the meat first going into the pan.) 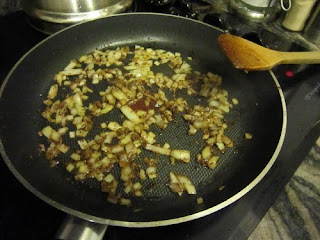 Remove from the pan and add the onion. Saute onion until translucent. 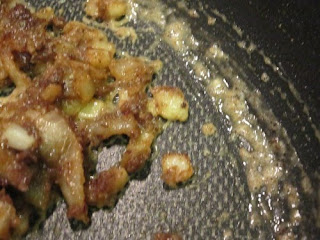 Sprinkle the AP flour over the onion and remaining fat. Stir and cook the flour until it starts to brown. 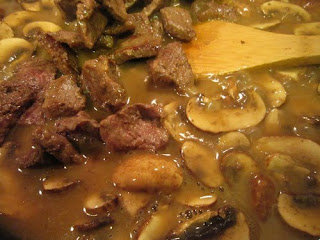 Add beef broth, mushrooms, a couple of dashes of Worcestershire sauce, salt and pepper to taste then simmer until the mixture is thickened. Add the beef back to the mixture. 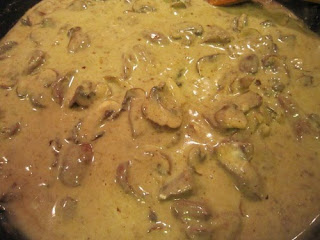 Turn off the heat and gently stir in the sour cream. 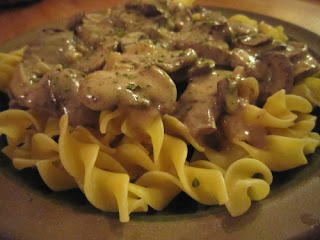 Serve on egg noddles and enjoy!