With my 32nd birthday just a couple of months away, I may as well explain the yakudoshi project. Like many of my previous projects, it is grand in scope and not realistically achievable. But I should start at the beginning. What the heck is a yakudoshi? In Japanese tradition it's a year for struggle, change, and realizing ones purpose. For men it's 42 (41 by western reckoning) and for women it's 33 (32 by western reckoning). I was going to just take a trip to Japan to be blessed and then the opportunity to go on the whirlwind Europe trip last March landed in my lap. I was going to say that going on the trip would be enough because I was home for New Years and I received blessings at the shinto shrine...but this is me and I don't do anything by halves.

Perhaps we should go back even further for the origin story of the largest piece of the yakudoshi project. Back to September 2011 at a hotel in Rockville, MD. I was doing my "FEED ALL THE PEOPLE" thing at the Bomb Shelter Radio party at Interventioncon and I heard that a rumor was spreading about this professionally catered party...the party I was attending...the party that I was feeding. Wait? The food that I threw together in my kitchen last night? Professionally catered party? WTF? I went home and thought about it...and thought about it...and applied to culinary school. But I was going on the whirlwind Europe vacation in March and I didn't want to miss a week of class during my first semester so I waited until the summer to start taking classes. And I survived my first lab class. And I'm happy.

What I'm finding is that cooking feeds my soul and work feeds my bank accounts. I defined myself as an office drone for most of my adult life because I didn't have any other way to answer the "what do you do?" question. Saying "I'm in culinary school" makes me smile and it's a much more interesting conversation than "I'm an office manager." Don't get me wrong. I like my job. I respect my employer. I'm not leaving the corporate world to be a chef...but I don't want my day job to define who I am.

So you're going to culinary school...what else? There's the 1,000 cranes project that probably won't be completed in time for my birthday. I have about 200 folded and it's slow going because I bought 3.5" paper and it makes my hands cramp up after about 10 cranes. So that might happen eventually...or not at all. Yes, I can buy larger paper but I already spent the money and I don't have space for a giant cascade of cranes.

I'm getting rid of things that make me unhappy. Well, the specific items don't make me unhappy but the clutter does. I desperately want to be a minimalist but I collect collections so it's difficult. But it's getting better.

I haven't been writing in this blog, that's for sure. My life is ripe for blog entries and I'm too tired/lazy to write them. Bad penguin, no shrimp. I have pictures of the food I ate in Europe and the food I cooked in class. 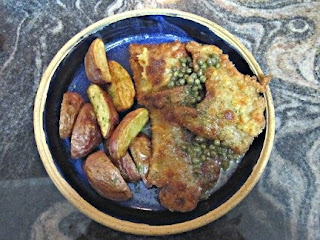 What else have I been up to? I planned a lunch for 300 people back in May. That was definitely outside my comfort zone. And that's the point of the project, to push myself out of my comfort zone to see if I can thrive. I hate risks and I love order (though you wouldn't know it to see my house right now) but that's not real life. This is my year and I'm testing my limits.
Posted by Kitchen Penguin at 10:12 AM